Riaan Cruywagen, the legend behind my microphone

“If on a particular day you make a mistake,

forget about it and hope tomorrow goes better”.

Eleven years in radio.  A decade plus one seems like a solid session for a career.  Still, when I look at our media legends, I realise I’m still very much wet behind the ears.

In the evenings he appears on television and tells us in perfectly formulated Afrikaans what is happening in the world and after half an hour he’s gone. As if the News at 7 is his only reason to exist.  But at the recent KKNK he finally became a real person.

He came walking behind the RSG stage.  Very suave with his motorcycle cop sunglasses.  “Hello.  I enjoy listening to your show in the mornings”.  The legend.  The man that demands respect and relevance among a wide stretch of generations.  A figure that is rated among modern pop culture and respected leaders in different areas of society.

What’s News? Riaan Cruywagen.  What do you ask a legend in an interview?  How smart do you really want to sound?  How deep do you want to delve on a KKNK stage with the sun pounding down on a late morning in the Klein-Karoo?

Before the program started we had a chat about the time he shared a potjie with my father.  It also became clear in the “hobby” and “what do you like doing in your spare time” part of the interview that he doesn’t really cook, but has at least mastered a pot.

After we’ve welcomed the listeners and audience to the KKNK, he makes his appearance on stage in front of a jovial crowd all of whom put the morning aside just to see him in real life.

Riaan, no, mister Cruywagen, decided to write a book about his life behind the microphone and in front of the camera after 47 years in the broadcasting industry.  RSG invited him to talk about his many highlights, lessons and stories live in Oggend op RSG. From bubble baths surrounded by girls in bikinis to a different type of microphone, guitar in hand in a rock video and even presenting in the SAMA 18 awards show.

You see someone on television for many years and you wonder what type of person he or she really is.  There is a certain expectation.  To be hounest I expected a holier than thou nose in the air personality.  Exaggerated properness.  I thought I would have to count every word carefully and use perfect Afrikaans at all times.

After the first couple of questions I realise there’s nothing to be worried about.  Nothing was forced.  You ask him a simple question and he is more than willing to expose all areas of his life.  Not only did mister Cruywagen chat freely, he even started dancing to Pieter Smith’s TV Keurspel.  During “Heidi” he took our station manager Magdaleen Kruger for a sokkie-dance on stage.

In Johannesburg mister Cruywagen provides training to newsreaders.  Something I didn’t experience myself.  I asked him for advice about news reading.  I was expecting an in depth analysis of quality news broadcasts and correct pronunciations, but apparently his tongue sometimes also feel like a dry sponge that just can’t seem to let “Tc”ele roll from his lips.  “If on a particular day you make a mistake, forget about it and hope tomorrow goes better”.

It doesn’t happen often that I ask someone for an autograph.  After the interview he took the time to sit and sign my copy of Wat’s Nuus.  “What an honour to have shared a microphone with you.  Riaan Cruywagen”. Humbled I take the book from him.

I wonder how weekdays will change when mister Cruywagen decides to unhook the news microphone from his lapel for the last time. He is a legend yes, but now also just a person. 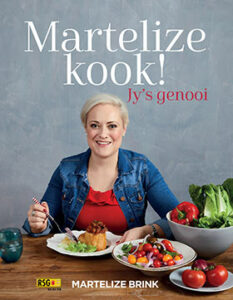